A leaking shower is one of the most common faults faced by homeowners and investors, especially those with units, in bathrooms. Failing to stop a leaking shower quickly can lead to wider 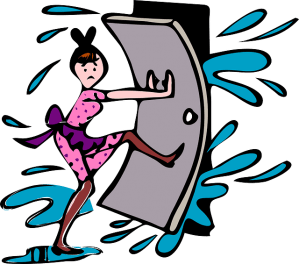 leakage throughout the bathroom and structural issues. This can prove very costly and time consuming. So can you fix a leaking shower or do you need to replace the whole base?

How to tell if your shower is leaking?

What can cause a leaking shower?

A leaking shower can be caused by a number of issues, especially in older houses. Tiling issues such as poorly installed waterproofing, tiles not fitted into the adhesive properly, holes in the grout and the grout being implemented incorrectly can cause major leakage issues, as can poor drainage, leaking pipes behind the wall and the building movement, even by the slightest bit.

If your shower is leaking, the first thing that needs to be done is to assess where the leak is and how bad the damage is.

To assess the extent of the damage and decide whether you need to repair or replace your shower, you will need to contact a professional to come and have a look for you. Before you choose your expert you might find this article useful – Things you should know about waterproofing experts . RhinoSeal are experts in shower sealing and repairs, and have developed systems to either repair or replace your shower, with minimal disruption to you.

RhinoSeal have developed a state of the art Stop Leak Injection system that can repair your shower leak, without the need to remove tiles. We can be in and out of your house and stop a leaking shower in just one day. We use a three-step process to ensure that we stop the leak and leave you with a waterproof shower.

Sometimes there is just too much damage to repair the leak and we need to look at replacing the shower base for you to ensure that we can stop your leakage problems. To ensure that you will get the best quality shower base, and to prevent further leakage issues, RhinoSeal have developed a five-step system to replace your shower base over two days. This means that you will be able to shower without worrying about a leaking shower again.

If you need stop a leaking shower before it damages your investment, give RhinoSeal a call today on 0478 956 892 to book in an obligation free quote.

Also have a look at some of our testimonials here.